“Frankly speaking, we don’t see any significant improvements from 2017 to date; quite the contrary, the situations are deteriorating, the economy is worsening, and the unemployment rates have increased considerably. The circumstances have not improved ever since Da’esh had been driven out, honestly. It seems as if the Iraqi society does not trust women. I personally do not see the NATO mission achieving any of the things for which we once hoped.”

This quote by a prominent Iraqi civil society activist captures the insurmountable obstacles Iraqi women face as they seek to participate in peacebuilding processes. This activist participated in one of the interviews conducted as part of the University of British Columbia’s Master of Public Policy and Global Affairs Capstone Project. Over the eight months we spent on our research, we have heard insightful observations from various stakeholders while examining the working relationship between the Canadian Armed Forces (CAF) and local Iraqi civil society organizations.

Through the lense of UNSCR 1325 and using Operation IMPACT as an illustrative case study, we have discovered that the CAF’s current implementation of the WPS agenda has clear shortcomings in supporting local women’s participation due to a lack of localized approaches.

The UNSCR 1325 on Women, Peace, and Security outlines four pillars to address the needs of women and girls in armed conflicts, and to promote non-violent forms of conflict resolutions. These pillars are: prevention, protection, participation, and relief and recovery. The pillars are equal in importance and are interlinked.

The prevention pillar requires integrating a perspective that accounts for men and women’s differential experiences, boys and girls in conflict situations, into all conflict prevention and resolution strategies and activities.

The protection pillar intends to promote the safety and security of populations at risk in armed conflicts, humanitarian and emergency situations. It incorporates a requirement to promote and protect women and girls’ human rights progress.

The relief and recovery pillar promotes women’s equal access to humanitarian and development assistance and advocates for aid services that support all at-risk populations. It addresses the specific needs of women and girls in all relief and recovery efforts.

The participation pillar advocates for the active and meaningful participation and representation of women and local women’s organizations in peace and security activities. It includes peace processes and greater involvement by women in peace operations as soldiers, police, and civilian representatives.

While UNSCR 1325 emphasizes the inclusion of women and girls in peacebuilding processes under the participation pillar, this is currently not occurring in Iraq. Although we acknowledge the CAFs’ conscious efforts in adopting the aspirational objectives of UNSCR 1325 by using the four pillars as guiding principles in operation planning and execution processes, there is a clear demand for a more inclusive implementation of the women, peace, and security agenda that stimulates the meaningful participation of women and women’s organizations during peacebuilding activities.

Women’s full participation is essential to every aspect of achieving and sustaining peace and stability within a community. The UNSCR 1325 and subsequent resolutions SCR 1888, SCR 1889, and SCR 2122 urge UN member states to address obstacles and increase the participation of women in peace processes and decision-making. While peace agreements have started to include gender experts, a study of 31 major peace processes between 1992 and 2011 revealed that only nine percent of negotiators were women. The same study found that peace agreements are 64 percent less likely to fail when civil society representatives participate. A global study on the implementation of the UNSCR 1325 found that women’s participation increases the probability of a peace agreement lasting at least two years by 20 percent and the probability of a peace agreement lasting 15 years by 35 percent. 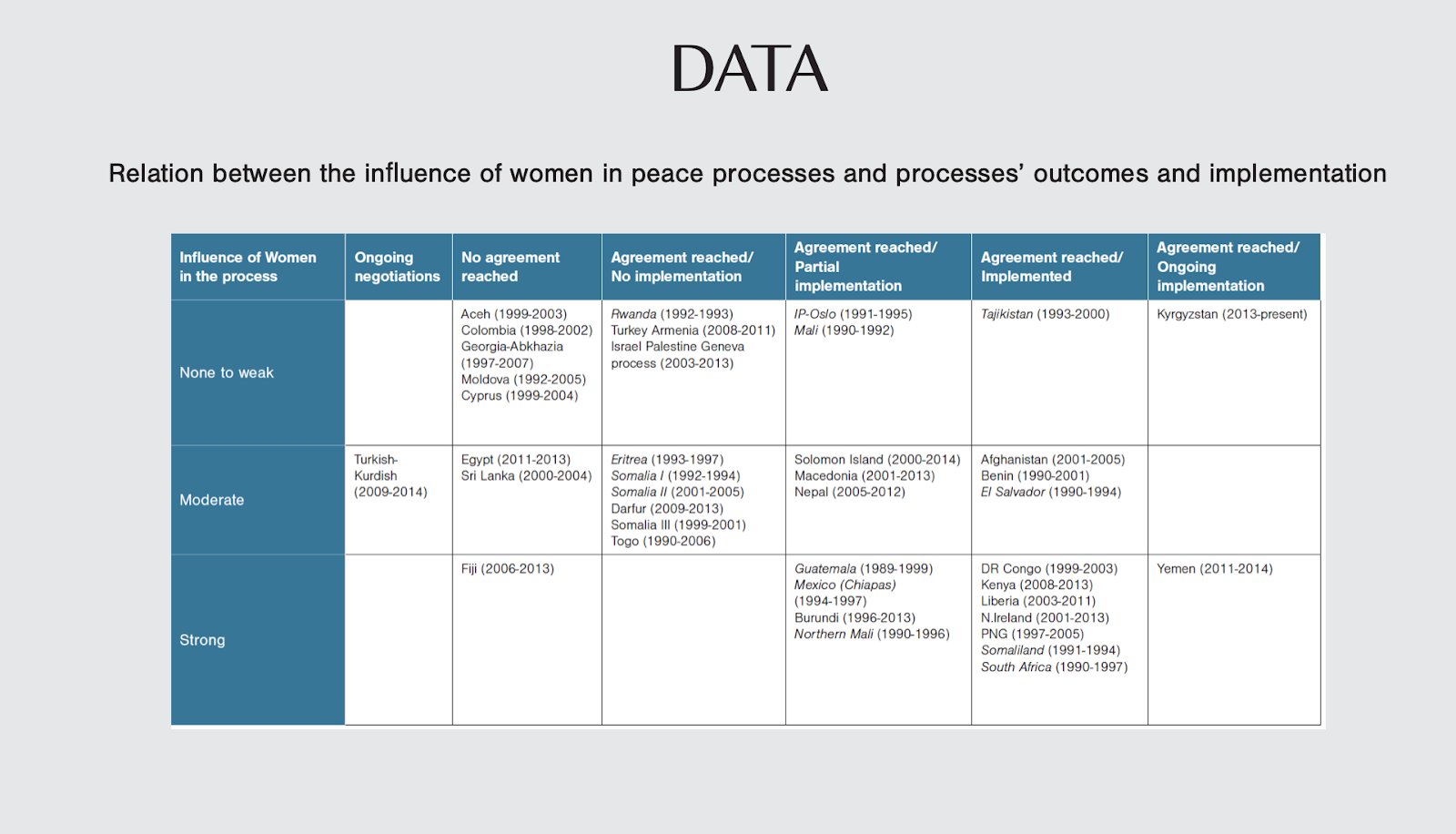 Figure 1.  Relation Between the Influence of Women in Peace Processes and Processes’ Outcomes and Implementation. Retrieved from: https://wps.unwomen.org/participation/

After conducting extensive literature reviews and consulting with subject-matter experts, we identified three research questions that guided our report:

The UNSCR 1325 on Women, Peace, and Security treats the four pillars as having equal importance. However, the experiences of many Iraqi women demonstrated that the participation pillar is having uneven operationalization and implementation in local peacebuilding processes. There are differing perceptions towards military forces and government institutions among local Iraqis. Many local Iraqi women often view the Iraqi military as an agency of the government and that constitutes a significant obstacle to women’s meaningful participation. The Iraqi military and government institutions often discriminate against women and exclude them from operational and decision-making processes. Thus, there is a deficit of trust between local civil society organizations and the Iraqi military due to histories of abuse, lack of accountability and gender discriminations.

“It seems as if the Iraqi society does not trust women.” Iraqi female activist, interviewed in December, 2020

The need to place Iraqi women in decision-making positions is clear. Women cannot affect the desired change in peace and security as their systematic exclusion persists. Increasing Iraqi women’s local participation will strengthen the relationship between the CAF and local civil society organizations. Localized peacebuilding reduces violence, improves relationships between citizens and those in positions of authority and power, and provides initiatives that are tailored to the unique needs and characteristics of local communities. The participation pillar of the UNSCR 1325 in Iraq urgently needs to be addressed. Women’s participation can transform how the CAF approach prevention, protection, and relief and recovery elements of peace and security.

A former RCMP gender advisor deployed to Iraq shared in an interview with the team an inspiring experience of how she was able to assist in empowering Iraqi women through meaningful participation. Since the CAFs do not offer domestic gender training courses for foreign military officials, the Canadian gender advisor arranged an opportunity for two Iraqi women to participate in Australia’s gender advisory training program via Global Affairs Canada. The financial costs were waived for the two Iraqi women through the Canadian gender advisor’s personal connection with an Australian gender advisor. Upon returning, these two women translated the course materials into Arabic and offered them to Iraqi military personnel of all rankings. Although the initiative was not part of the CAF’s mandates at the time, the gender advisor’s efforts directly increased the meaningful participation of women within the Iraqi military and government.

While the Canadian gender advisor’s initiative to send the two Iraqi women for training in Australia had empowered and increased women’s meaningful participation, our recommendations aim to make such initiatives better-resourced, systemic, and more sustainable. The meaningful participation of local women will amplify their voices as trustworthy and capable active participants in society and thus contributing to the implementation of enduring peace and security.

What can the Canadian Armed Forces do to increase women’s participation?

Based on the findings gathered during interviews with subject-matter experts, the need to include Iraqi women in peacebuilding processes is evident. Women’s organizations are often politically marginalized, and additional measures must be enacted in order to elevate their visibility and abilities. Women cannot affect the desired change in peace and security as their systematic exclusion persists. Therefore, we developed recommendations to address the identified barriers to participation for local Iraqi civil society organizations.